(This article is part 2 of a series. To read part part 1, see Is Your Plate Too Full?)

One day this expert was speaking to a group of business students and, to drive home a point, used an illustration I’m sure those students will never forget. After I share it with you, you’ll never forget it either.

As this man stood in front of the group of high-powered over-achievers he said, “Okay, time for a quiz.” Then he pulled out a one-gallon, wide-mouthed mason jar and set it on a table in front of him. Then he produced about a dozen fist-sized rocks and carefully placed them, one at a time, into the jar.

When the jar was filled to the top and no more rocks would fit inside, he asked, “Is this jar full?” Everyone in the class said, “Yes.” Then he said, “Really?” He reached under the table and pulled out a bucket of gravel. Then he dumped some gravel in and shook the jar causing pieces of gravel to work themselves down into the spaces between the big rocks.

Then he smiled and asked the group once more, “Is the jar full?” By this time the class was onto him. “Probably not,” one of them answered. “Good!” he replied. And he reached under the table and brought out a bucket of sand. He started dumping the sand in and it went into all the spaces left between the rocks and the gravel. Once more he asked the question, “Is this jar full?”

“No!” the class shouted. Once again he said, “Good!” Then he grabbed a pitcher of water and began to pour it in until the jar was filled to the brim. Then he looked up at the class and asked, “What is the point of this illustration?”

One eager beaver raised his hand and said, “The point is, no matter how full your schedule is, if you try really hard, you can always fit some more things into it!”

“No,” the speaker replied, “that’s not the point. The truth this illustration teaches us is: If you don’t put the big rocks in first, you’ll never get them in at all.” 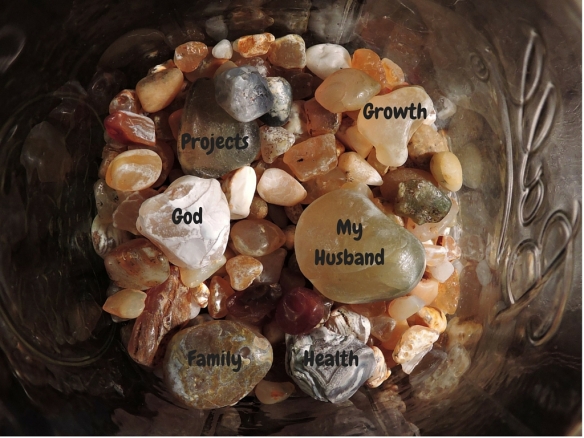 I read that illustration many years ago by leadership expert Stephen Covey and I go back to it when my life seems too full of urgent things leaving no room for the important things.

It reminds me to do the big things first before my “jar” gets filled up by all the little things that won’t mean much in 20 years.

When I find myself frustrated by my lack of time for those most important things, here’s how I get back on track to Putting First Things First:

So this is where I am, putting first things first. My next step is taming my to-do list to make room for my priorities on my daily schedule.

How about you? What are your “big rocks”? Do you need to make room for some of them today? I hope you’ll scroll down and leave me a comment.

We'd love to hear from you. Cancel reply